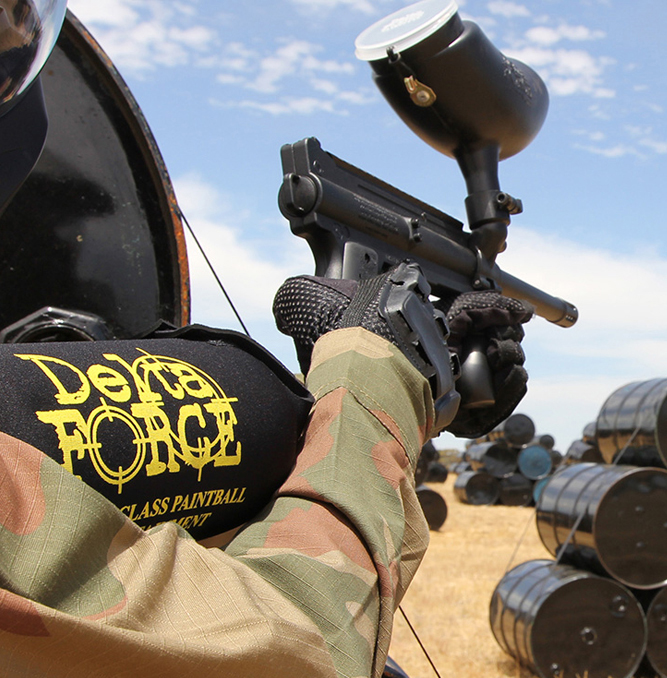 The Speedball Arena is the modern day equivalent to the gladiator arenas from ancient Roman times. These arenas would see men and beasts compete against each other in full combat, much to the delight of a baying crowd of blood thirsty onlookers. It was pretty heavy stuff. Today, two teams compete against each other in the Speedball Arena. Each team is separated by rows of steel drums, purposely arranged to ensure no 'safe' spot remains safe for very long. In this game there will be no prisoners, no second chances and zero room for error. The aim of the game is total annihilation! If you're wondering why it's called 'Speedball' then you won't be wondering for long. Let's just say that as soon as the game begins, the paintballs will begin to fly and you'll definitely be able to hear them. This is intense paintballing, the way it was supposed to be played. Our Speedball Arena definitely has the balls, but the real question is, do you?

See our game zones in action below!

Manchester Paintball's mind blowing movie set game zones are modelled on some of the world's most iconic silver screen films, popular television shows and breathtaking locations. With props sourced directly from Hollywood film sets (such as Tom Cruise blockbuster Edge of Tomorrow and James Bond hit Casino Royale), our epic scenarios are the perfect backdrop to an unforgettable paintball experience.

Manchester Paintball is also pleased to provide state of the art paintball equipment and a five star health and safety record. Whether you're organising a stag do or a hen party, celebrating a birthday or simply popping down for a session of adrenaline fuelled fun, Manchester Paintball is happy to cater for any occasion. We'll even provide your lunch if you let us know in advance! A-list celebrities such as Wayne Rooney, Lewis Hamilton and Elle Macpherson have visited our paintball centres over the years. Why not be the next VIP through our gates?

Get in touch with us

Ready to start your paintball adventure? Why not call one of our friendly event coordinators on 0843 178 2470*? We’re open. Alternatively you can visit our paintball booking page or request a callback.

Delta Force Paintball is a 5-Star Accredited Member of the UKPBA (the Governing Body of the sport in the UK). Call Charges: *Calls to this number cost 5p per minute + network extras.